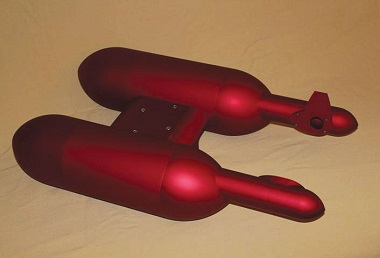 The probes incorporate the well-established phase Doppler technique for directly measuring the size and velocity of individual droplets in the cloud. The measurement method is sensitive only to spherical particles and therefore non-spherical ice crystals are rejected. Furthermore, the probe has the ability to differentiate between liquid droplets and droplets that are frozen. The PDI Flight Probe overcomes the inherent problems, such as depth-of-focus, measurement uncertainty, and coincidence errors in high number density environments, faced by older and obsolete measurement technologies which are based on forward light scattering.

The PDI Flight Probe offers turnkey operation with a fully automated setup feature. The flight probe system can be used for the real-time, non-intrusive measurement of individual droplet size and single velocity component in a variety of flight and wind-tunnel applications. The complete instrument includes the flight probe (including the optical transmitter and receiver), ASA signal processor, and the AIMS system software. The diode-pumped solid state (DPSS) laser used in the probe provides stability, compactness, ruggedness, and high reliability; it eliminates the need for inefficient and unreliable fiber optics. The probes have optional built-in heaters to prevent ice accretion. This allows the flight probe to be used under extreme icing environments without any signal loss.

The dual size range version essentially combines two PDI instruments in a compact, aerodynamic package. The output of the two PDI channels are combined to form a single histogram of the droplet size distribution. A canister version is also available. It has been flown on various fixed wing aircraft including a U.S. Navy Twin Otter, a C-130, and the UH 60 helicopter.